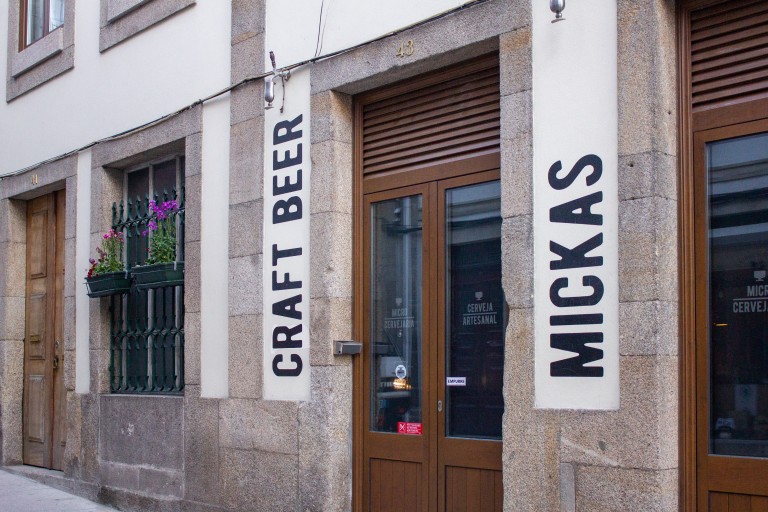 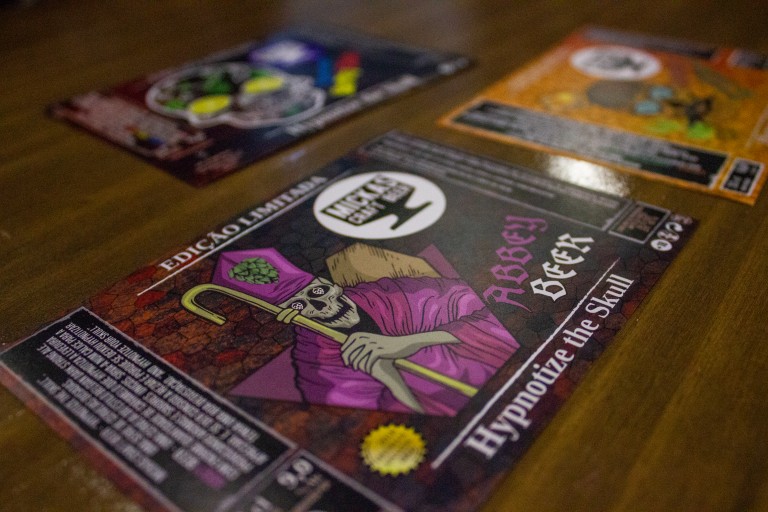 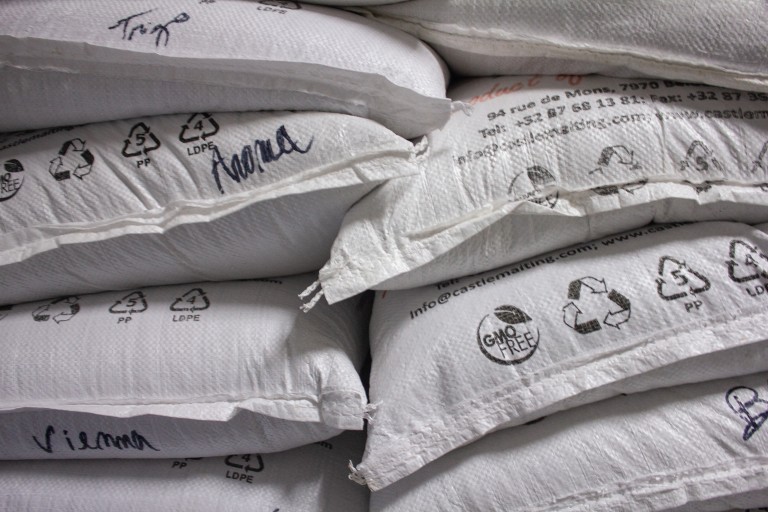 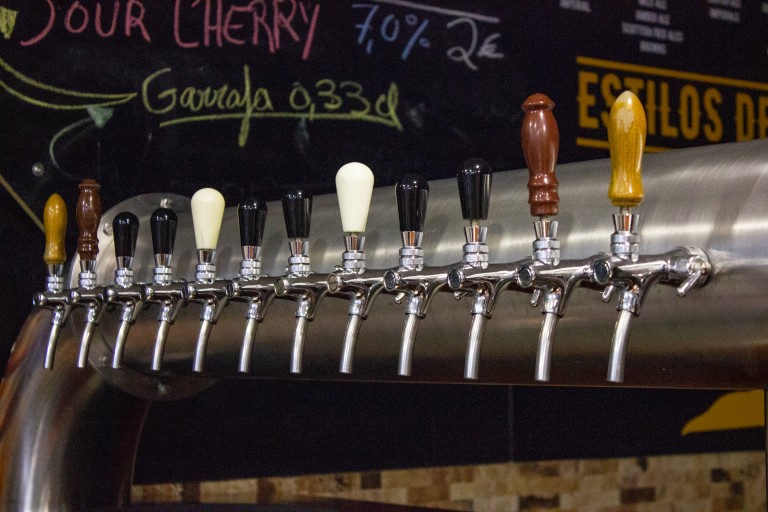 In addition to visiting the space, our main objective was to understand how “Mickas Craft Beer” was born and who is behind the counter.

Accompanied by a blond ale and a pale ale, we started the interview.

Mickael Sequeira, Mickas, is 35 years old and was born in France and came to Portugal (with his parents) when he was two years old. Has a daughter.

Have you always lived in Vouzela?

He always lived (and lives) in Vouzela, having been away when he studied in Porto (he took the technical laboratory course in food quality and studied food engineering) and in Lamego, when he was working there.

He worked on cheese in Lamego for 6 years (making cow's cheese), 3 years in Palmela (making buttered sheep's olive cheese), was in France for an internship and only then opened “the bar” where we met at the time of interview.

And how did the idea of ​​producing beer come about?

After having tasted the first craft beers that were appearing, he ordered the material on the internet and tried to make beer with a friend. “I've been making beer for a long time, for 9 years”, he starts by telling. At the time, I made it at home and made "only" 2 liters ... Then I "improved" the recipes to make more quantities to give to friends ... When I finished, I did more. “That was how the passion started and I realized that I had a taste for making beer. Really like! You can invent, create and drink (laughs) ”, says Mickas.

How did the idea of ​​opening the “Micks Craft Beer” space come up and why in Vouzela?

At the beginning I was asked “why did you open a space in Vouzela?” “I answered, why not in Vouzela !? A lot of people show up at Mickas who comment “a space like this, I wasn't expecting it, but they are pleasantly surprised” ...

“This is where I grew up, this is where I live and this is where I think I want to stay,” he adds. I had this space and I decided to produce and sell in the same place. For the decoration of "my" space, I was inspired by the places I visited and the places I went to in Porto, Aveiro ... ", he shares. The space is decorated with the theme of beer production, and has very original decor details (street lamps and bathroom mirrors). At Mickas Craft Beer it is also possible to snack (lupins, chorizo, peanuts, pizzas). It has a room with seating for 27 people and two nice tables outside. When the weather warms up, people are more on the street and the front neighborhood, which is a wine store, lives together.

Has craft beer won many admirers?

“We are a wine country, but we drink more beer, this is true”, shares Mickas. The idea people have is that drinking wine is in taverns, not in bars ... Beer is another story. You can drink beer anywhere, ”he says. The concept of craft beer has existed in Portugal for 10 years ... “When it started to appear, I immediately started experimenting. This type of beer "is a science", and there are many differences between this type of beer and "normal" beer. From the additives that are not added to craft beer, also because it is not filtered; craft beer has live yeast and is a live beer (which can evolve over time and improve), unlike industral.

How long did it take you to know how to make beer?

“I used to make beer long before I made cheese (laughs) but I'm still learning). “I learn from“ the guys ”who make beer, try new things and read about it”, he tells us.

Do you make a lot of beer?

It produces 10,000 liters of beer per year, "it's not enough", he tells us. Other producers make 70/100 thousand liters per year. This year already produced more than at the same time last year, "but even so, my production is small".

The dynamics, distributors… how did it come about?

"Well, I was learning" ... "Doing what you like pays off on a personal level", he shares. "I have the understanding and family support, which is very important", he adds.

Where can you find your beer?

Here at the bar and in some bars in Viseu, Aveiro, Porto. Mickas Craft Beer's beers are in various locations, "I don't even know where they are." I do not negotiate the price, I have a recommended price (3 euros a bottle) and people are willing to pay this or even more if they like “your” beer. In Portugal there are a lot of people making very good craft beer. There is a lot of cooperation between the guys who make beer, ideas and projects are shared… (a few minutes before Mickas had received a call from a colleague asking if he wanted hops that were at a good price) and besides, you can never do it equal beer, each one “gives his touch”, “the guys get along well!”, he comments.

“The life of the beer until it reaches the glass is 30 days… after making a batch of beer or“ a batch of beer ”(laughs) and spending about 8 to 10 hours in front of the pot, fermentations follow . Beer consists of water, malt (which gives color), hops and yeast ”. The most important thing in the beer making process is hygiene, hygiene and hygiene. Beyond hygiene is technique. All the processes and recipes are pointing out in the notebook and have already tested 50 different ones…

In addition to making beer and opening the space to the public on Fridays and Saturdays, he still designs the labels, participates in craft beer fairs and other associated events and the wooden packaging to store the bottles (reusing the wooden material he finds) .

“I wake up, I have time to take my daughter to school, I come for coffee… I spend these two hours living and relaxed. Then I come here (bar) to check the vats, see if it is fermenting, if everything is ok ... Some days ago I go to Aveiro to take my beers ... ”, he explains.

Open another larger space (also in Vouzela), where beer production will take place and have a tasting room, but the idea is to continue to have the bar too.

What do you value most in the environment you live in compared to the city since you have also lived in one?

“Here, we may not have what certain cities have (culturally, for example) but we have much more than in a city (at least I think)”, he shares.