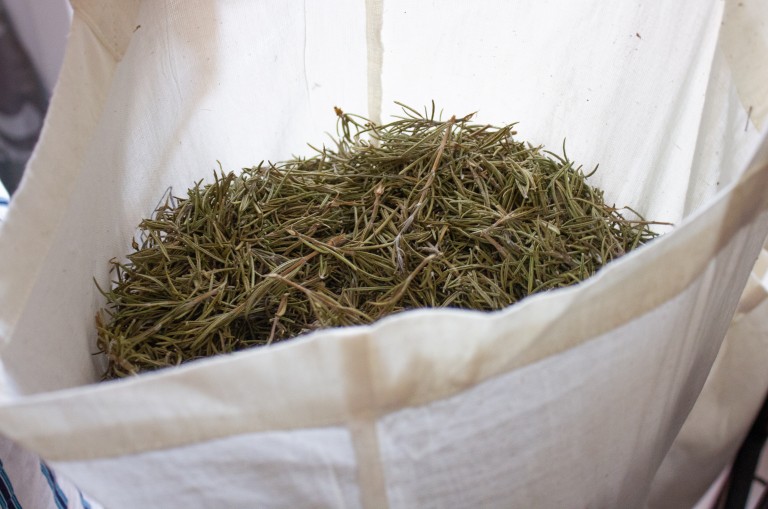 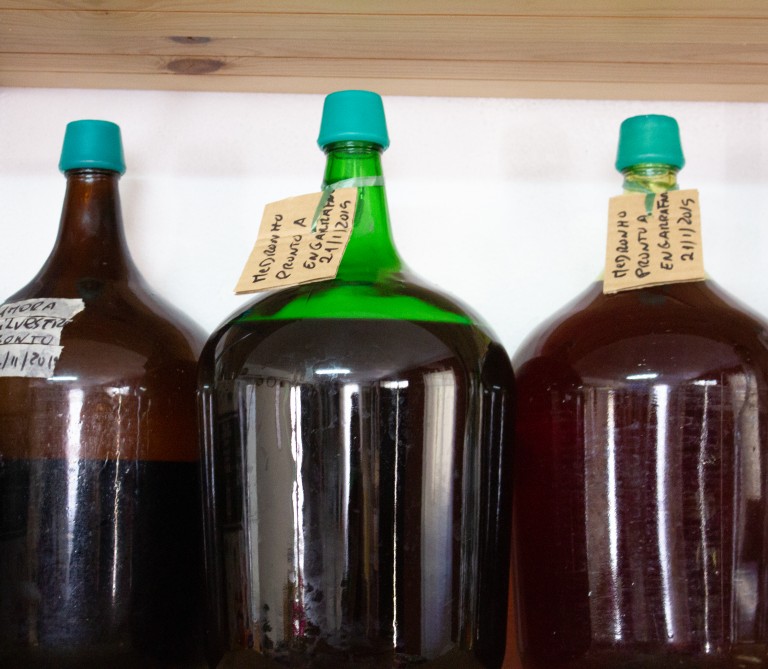 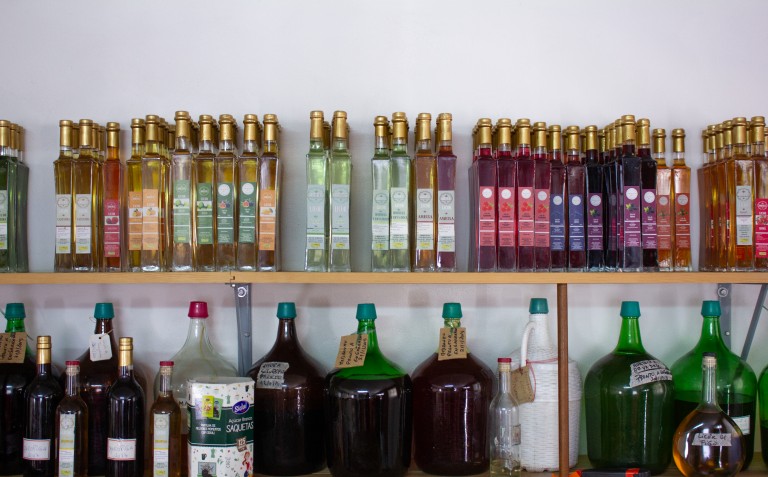 We are in Sul, a small village, former capital of the county and today we will interview Lucia.

Between the kitchen and the terrace

Lúcia's house is in Aveloso de Sul and we went to her place to know her story and her kitchen.

Around the house are many fruit trees and the sun illuminates the terrace practically all day. We were very well received by Lucia and her husband, who help her at the fairs and markets and also in the construction of exhibitors for the teas and liquors that she produces.

Lucia Maria Ferreira was born in Sul, São Pedro do Sul and always lived “here”, she worked in Oliveira de Frades and Viseu. Mother of two boys, Pedro and Bruno she is married with Alfredo.

Before we start to tell you this story, we want to underline that this story is one of those where photographs speak together with the text, so we invite you to follow the pictures!

When was the “Sabores de Sul” project born and how was the “road” until today?

The project started in 2012 “we started both”, he says, since was Alfredo who guides us through the house. Lucia began by showing us the kitchen, which was made just to make the products she sells. A kitchen with two doors, one for input of raw materials and another for output of the finished product, "was mandatory in the project to be like this," she says. A tidy kitchen was bright and it smells so good, because of the sweets that were made recently.

She shared with us that after becoming unemployed from her last job, she began to improve in sweets, jams and liqueurs. She was able to associate the knowledge that she already had with the new learning of the training and the raw material that was in her backyard, in the Sul village and in the friends of other villages of São Pedro do Sul. This way she fights against the waste of fruits, herbs and infusions and do what she likes. In addition to cooking and selling her products, Lucia is focus on learning more, so she participates and conducts cooking workshops.

What was the first recipe that you learned to make?

“I already knew some,” she says, “but it was pão de ló - sponge cake!”, a traditional confectionery of the region that appears in the Gastronomic Chart of the region of Lafões and named as the village, pão de ló de Sul - sponge cake of Sul. However, with the gastronomy fairs and fairs in which she participated, Lucia identified that some people were allergic to gluten. So in order to everyone could taste and eat the "piteu" (delicacy) of the confectionery, she adapted the original recipe and began to make it with cornmeal. The challenge was need! but “the sponge cake didn't grow”! She kept trying. It increased in egg yolks and the cornmeal sponge cake was recorded as her recipe.

What about jams and liqueurs?

Also at this stage she implemented the knowledge that she had and decided to try the recipes. “I started making jams of various fruits, the fruit left over from the sweets used for the liqueurs, is what I still do,” she says.

Do you know all the recipes or you have them wiritted down?

“I've been doing my things since 2012, only when I cook cookies I have to go see the recipe,” she shares.

What do you make and where can the people buy them?

“I do a lot of things and I don’t waste what is around here and there,” she says. I make “jams, jellies, liqueurs, sponge cake, pies, cookies and teas…”.

Next to the kitchen, we first photographed the teas in cloth bags that were still waiting to be packed. Lucia was showing us bag by bag as she said one by one what it was and what it was for. She showed us lemon balm, lemongrass, rosemary, which could be used not just a tea but as a spice in food, St. John's wort “this is good for the liver and bladder”, eucalyptus “this is good for curing sinus”, also mint, the bay leaf and the prince herb.

The liqueurs, jams and cookies were shown us on the terrace. While we tasted the different flavors of the liqueur we heard about what they were made of. In the liqueur display made by her husband, the little bottles (some larger, some smaller) showed the wide variety of choice and also the dedication on the labels. We tasted passion fruit and arbutus liqueur and took others to taste at home with our family.

How is the liquor made?

“Put the fruit and alcohol in a glass bottle or carboy for 3 months, shake the bottles at least once a week… after that time, filter it and then bottle it”, revealed. "And then you drink," added Lucia's husband.

No, there are with flaxseeds, chia seeds, sesame and pumpkin seeds and ginger and honey rosemary cookies, oatmeal nuts and raisins and nuts “I sell well, people like them very much!”.

What are the variety of jams?

“I have many,” there are raspberry and apple jams, blackberry, fig, pine nut almond, tomato and ginger, pumpkin, pine nut and almond pumpkin, strawberry and chila. There is also quince jam and fig.

Where can be find the products you make?

In the traditional market on Friday in Vouzela and on Saturday in São Pedro do Sul. Also by order at home (Aveloso de Sul) and other gastronomic fairs in which Luia participates in the region.

What are the next challenges?

After betting on packaging and new design, the next step will be to create a website that advertises all the products that Lucia makes and through which it   also possible to sell.

“It depends on the time of the year but I usually spend some part of the day to collect fruits, herbs, eggs, nuts, sweet potatoes, cornmeal… then I have to wash everything and dry the herbs in the shade and cut the fruit to make the liqueurs and sweets. I have other days when I make cookies, take orders and register orders and make sponge cake. On Thursdays and Fridays I have to make more sponge cake and sweet potato buns for the markets and weekend fairs. When the liquor maceration is over, I boil the bottles, bottle them, put the labels and stamps (it's all done by hand). In short, I work many hours in the kitchen and not only… I deal with the packaging and labels in the print shop, parcel delivery, everything goes through me… ”.

What do you value most about the place where you live compared to the city?

Lucia starts by highlighting the fresh mountain air, the silence, the absence of heavy traffic on the roads, the fresh fruits and vegetables from the chemical-free garden, the people who know each other, and the fact that there is no stress. “We do everything calmly without strict hours… there is also plenty of sunshine and flowers, everything is beautiful in the countryside!”, she says.

We ended our conversation with Lucia showing the fruit trees in the garden, cherry, peach, lemon, quince, chestnut, hazelnut and loquat tree.